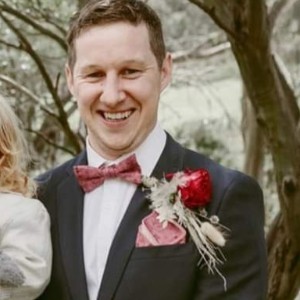 Everyone meet Firefighter David! He works for the local Corrimal Fire Station to protect his beloved community and he enjoys giving back and helping people in need.

When he isn’t looking after his community or making daring rescues for cats stuck up trees, David loves to get out into the great outdoors.

Having summited mountains in Nepal, Wikipedia claims are more technically difficult than Mount Everest. David is prepared for his biggest challenge yet. Keeping his shoes on whilst dancing up a storm. With previous performances including the first dance at his wedding and the nut bush at his mates 30th, David is ready to show you what he is made of.

David is taking on Stars of Wollongong this year to not only give back to his community but to also support an important cause and bring awareness for cancer.

Good On You David!

A couple of sexy firefighters dancing, that’s the kind of show I want to see 🔥🔥🚒🧯

Enjoy yourself, we admire your commitment to a good cause.

Keep trying, you'll get there. C

Watch out Maddi, Dave might trip you up. Well done mate.

Dance your heart out dingus.

Those hips don’t belong to you, they belong to the music 🎶 🕺

All the best dave!

You are undoubtedly the best human in the world. You are soo much better than me.

Remember the tine we first met David? Dancing in the rain on Oxford Street? If you dance like that night you will win this competition! All the best Prince. Xoxoxo

What a champion, danced your little heart and legs out.

Hey Dave, I hope you dance your way to your $ goal for charity. Good luck

When will you admit this baby is yours Dave?